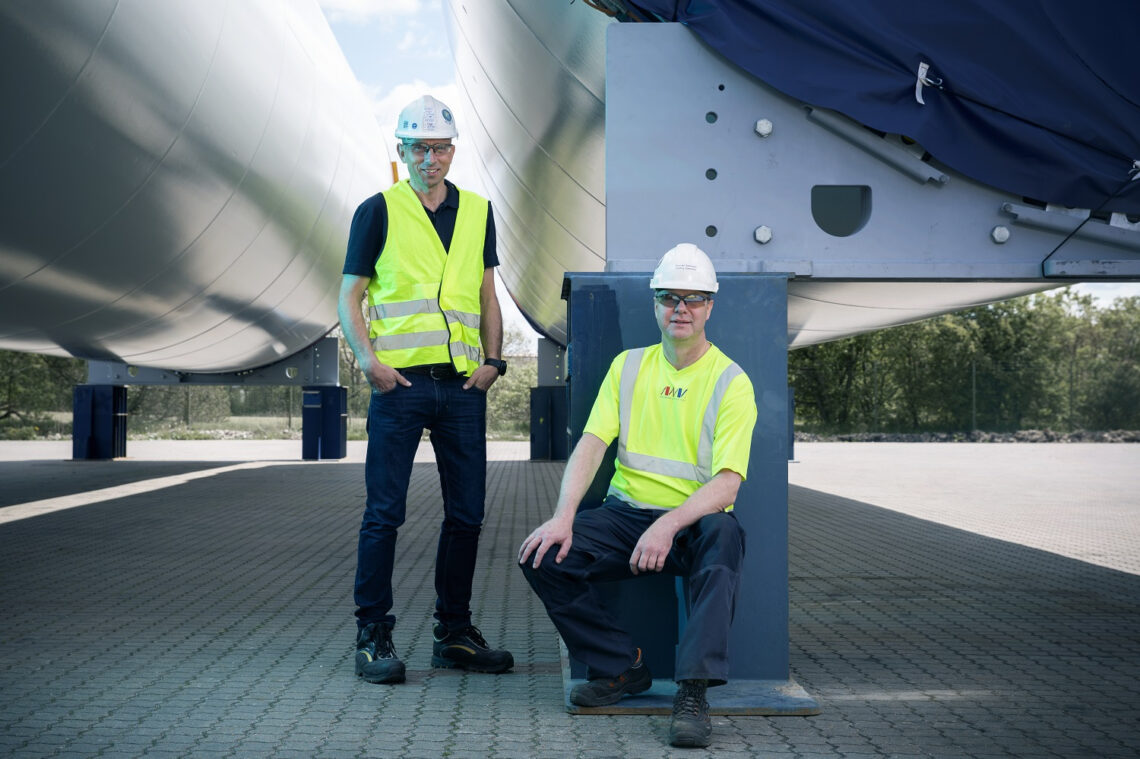 Together with MHI Vestas Offshore Wind? You can not be serious!”

Jesper Møller, Principal Expert at Siemens Gamesa, clearly remembers the astonished reactions from colleagues prior to the start-up of the CRIF project Common Equipment Towers facilitated by the Energy Innovation Cluster, where they would collaborate with MHI Vestas Offshore Wind to develop common equipment for tower transport.

“Collaborating with a competitor is something you just have to get used to. Normally it can take time to reconcile things internally. It does not get easier to have the competitor with”, says Jesper Møller. Two years later you have to say that it Siemens Gamesa currently has an order for 750 tower feet in the new, common design on the way, and at competitor MHI Vestas Offshore Wind, the first 150 tower feet in common design have arrived, and more are in the pipeline.

“The project has been successful. The new design is cheaper and saves us process time”, states Thomas Sørensen, Tooling Specialist at MHI Vestas Offshore Wind.

The joint project is not just about tower feet. It is also a litmus test of whether a common ground can be found to develop other non-business-critical elements based on a common standard for the benefit of the entire industry. You can, concludes both MHI Vestas Offshore Wind and Siemens Gamesa.

“There are some differences when it comes to meeting business philosophies and cultures on a common goal. It can be hassle enough to agree with yourself sometimes “, says Thomas Sørensen with a laugh:

“But the technicians can quickly agree on how things should look. We all have something heavy, round and long, we have to move, and we are bound by the same physical laws. It makes sense in every way to cooperate – also in other areas that are more complex “, says Thomas Sørensen.

Jesper Møller agrees; not least in that it is what is needed:

“We have developed a common tower footing here, but we have just as much developed a way of collaborating in the future. We have seen that there is a sensible business case in doing so,” he says.

The collaboration is already being concretized into further innovation projects, e.g. on a common tower foundation to the quayside. The ambition is to continue to industrialize the industry for the benefit of a unified industry, and ultimately a cheaper renewable energy production.

There is plenty to be done:

“We have identified 36 different areas where there is a potential for collaboration”, says Thomas Sørensen. But it is not enough that the large collaborations. Several small suppliers must find together so that they can match the tenders that come, when the big pools the tasks, and more must see a business idea in an increased industrialization of wind:

“If we are to succeed fully with industrialization, then it must also drip into the value chains”, says Jesper Møller:

“For example, there is a business area right now in operating and managing tower equipment for an entire industry. We often peak at different times, and we can share the gear instead of each having a lot of iron lying around, so “It will save us all too much. There are opportunities in that – but it is actually also a necessity if we are to realize the potential,” points out Jesper Møller.