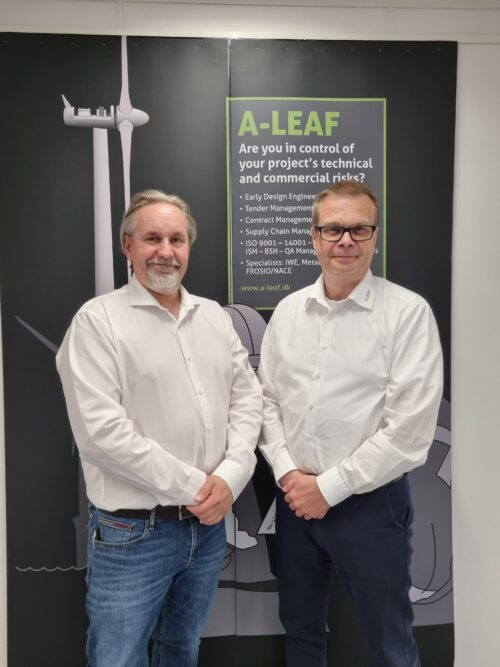 The Danish consultancy A-LEAF Specialized Consulting, which specialises in consultancy within the wind turbine industry and infrastructure projects, has moved its head office to Hadsten. It will be celebrated with a reception on Thursday, May 19. Today, A-LEAF has 100 employees around the world.

It became the centre of Hadsten, which was chosen as the home of A-LEAF’s new head office after the market for vacant offices had been explored for a long time.

“There were a lot of opportunities in play in terms of where we needed to establish ourselves. Aarhus was nearby, as it would be thought that it would be easier to recruit specialists if we have our head office there, but our conclusion was that Hadsten will give us the best opportunities for the future,” says Anders Grimstrup-Larsen, founder and CEO of A-LEAF.

He elaborates on the decision by saying that it is easy for employees to drive to and from Hadsten, and the vast majority of A-LEAF’s Danish employees have established themselves around Central and Eastern Jutland. The rest live around the world, in the many locations where A-LEAF solves tasks. This is for example in Spain, Poland, Norway, Taiwan and the United States.

Anders Grimstrup-Larsen himself has recently moved to Hadsten with his family, and he greatly appreciates the local and the opportunities to be part of a local business community.

“It’s one thing to be able to get to and from work easily, but what we think is just as important is to offer our employees a company with a good work culture and create a nice place to be. This, together with exciting tasks, is the criteria for being able to recruit the best employees. We appreciate having a good cooperation with the municipality and other local businesses and schools, and we must say that we have already been very well received,” Anders Grimstrup points out.

And hiring has been high on the agenda at A-LEAF, which is in the middle of a gigantic growth journey that has resulted in the company hiring 50 new employees since November 2020. The reason is a strong order growth, and an expanded focus on the services that A-LEAF offers customers.

“We specialize in advising the wind turbine industry, data centers and infrastructure projects. So far, our focus has been on quality assurance of steel structures, but in the autumn we expanded the business so that we can step earlier into the processes of the very large projects. This transformation has opened up far more and large tasks,” explains Anders Grimstrup-Larsen.

It is, among other things, two large wind turbine projects in the United States, which have been put in the order book. The new U.S. projects have meant that A-LEAF has started an office in New Bedford, USA, to get closer to the American wind projects, which are guaranteed to be tendered in the coming years.

“We are incredibly proud to have won the two major assignments in the United States. The tasks are right into our core area, where the focus is on quality assurance of steel structures, which we have a deep expertise in.

Therefore, as of 1 June August, A-LEAF has chosen to establish a branch in Hamburg, which will thus be the closest neighbour to the head office in Hadsten.

Has got room for growth

At the new 600 m2 office in Hadsten, there is room for more future employees if, as expected, growth will continue in the coming years. In the last two financial years, A-LEAF has been able to present an increase of 50% in revenue per year. The explosive development has meant that they have chosen to expand the organization at the head office. One of the new faces in the organization is Dan Borup Jørgensen, who is employed in a newly created COO position.

“In line with many new tasks and the creation of offices around the world, there will automatically be more administrative tasks, which is why we have hired Dan to manage and develop the organization,” says Anders Grimstrup-Larsen.

Dan Borup Jørgensen has extensive experience in the development and implementation of strategies.

“I look forward to helping A-LEAF on the growth journey that is already well underway. We are experiencing increased order intake in all three focus areas, wind, infrastructure and data centers, so it is important that the entire organization can keep up with the fast pace. I am very much looking forward to being able to contribute to solving this task,” says Dan Borup Jørgensen.

A-LEAF has just moved into a new head office at Østergade 9 in Hadsten and has branches at the Port of Esbjerg and from 1.8.2022 also at the Port of Odense/Lindø. In addition, it has offices in the following countries: USA, Taiwan, India, Egypt and from 1.7.2022 in Germany

Today, A-LEAF has 100 consultants and administrative staff in the almost eight country offices around the world and performs tasks in Taiwan, Vietnam, Egypt, the entire EU, GB and the USA.