“We haven’t just developed an app, but an entirely new phone” 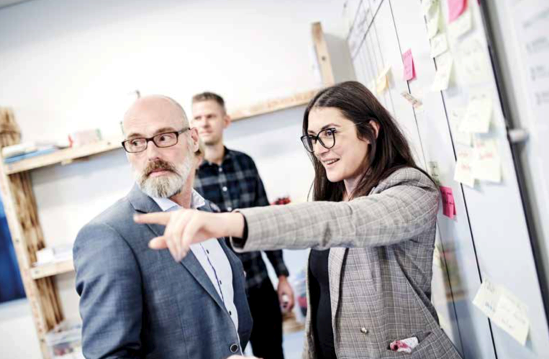 An innovation project in Energy Cluster Denmark has demonstrated surprisingly large benefits from digitalising corrosion monitoring at Semco Maritime, including the potential to reduce the costs by two-thirds.

In 2019, US-based market analysts Grand View Research calculated the value of the global market for corrosion protection as amounting to USD 7.4 billion, and predicted that the market size would approach USD 10 billion as early as 2027.

There is a lot of money in rust management, which is why Semco Maritime is unsurprisingly thrilled with the preliminary results of an innovation project that uses digitisation and AI to bring corrosion detection and protection into the modern era.

“We can potentially eliminate two-thirds of the costs of spotting corrosion, and we can similarly reduce the time required to analyse whether it requires remedial action,” says Alexia Jacobsen, Head of Innovation at Semco Maritime.  “Our customers would buy this product tomorrow if they could,” she adds.

While, currently, they can’t, Jacobsen – who is heading the PACMAN innovation project – is responsible for ensuring they will be able to in the future. The project is a collaboration between Semco Maritime and TREFOR, IPU, MM Survey and Aalborg University, aimed at developing a smarter way to tackle corrosion. The partners have just submitted a DKK 15 million application to the EUDP to bring the project to commercialisation.

“Observing and assessing the extent of corrosion is currently a very time-consuming effort. We want to develop an innovative method where we use machine learning not only to spot corrosion, but also to predict the need for maintenance,” says Jeppe Lützhøft, Senior Electrical Engineer and the person who got the idea for digitising corrosion management.

The PACMAN team is comprised of companies that can add complementary features to the solution and take the Automatic Corrosion Management innovation project further. The project has been developed under the auspices of Energy Cluster Denmark and received funding via the EU Regional Development Fund.

“We have benefited greatly from developing the project in collaboration with Energy Cluster Denmark, which contributed by bringing the partners together, obtaining funding and facilitating the process. Innovation requires funding, and the process requires support, both of which we received,” Jacobsen says.

The project began as a smarter approach to conducting corrosion inspection offshore. Among other things, the intention was to help reduce the risk aspect and time consumption related to manual inspections. In Semco Maritime’s innovation team, the idea was qualified and developed with Jeppe Lützhøft, and the first partners joined and contributed algorithm and user interface improvements. As the project progressed, it became clear that the scope had the potential to be expanded significantly.

“You never really know what you might uncover with innovation projects. In this case, we discovered that we could achieve a lot more than we’d initially imagined, and that our solution is of interest to a far larger customer base than we had envisaged,” Jacobsen says.

The offshore wind industry is not the only segment interested in the solution; it is relevant to offshore oil and gas producers as well, along with a long list of onshore sectors and industries. For example, TREFOR – a part of the EWII group – has signed on as a partner in the project because they see a great deal of promise in being able to measure corrosion more effectively.

“We are making conducting inspections both more affordable and safer, and we are making it simpler to understand what remedies are required to fix the issue. The solution is also interesting to actors in the maritime sector, for instance, and to companies working with bridge and building maintenance,” Jacobsen says.