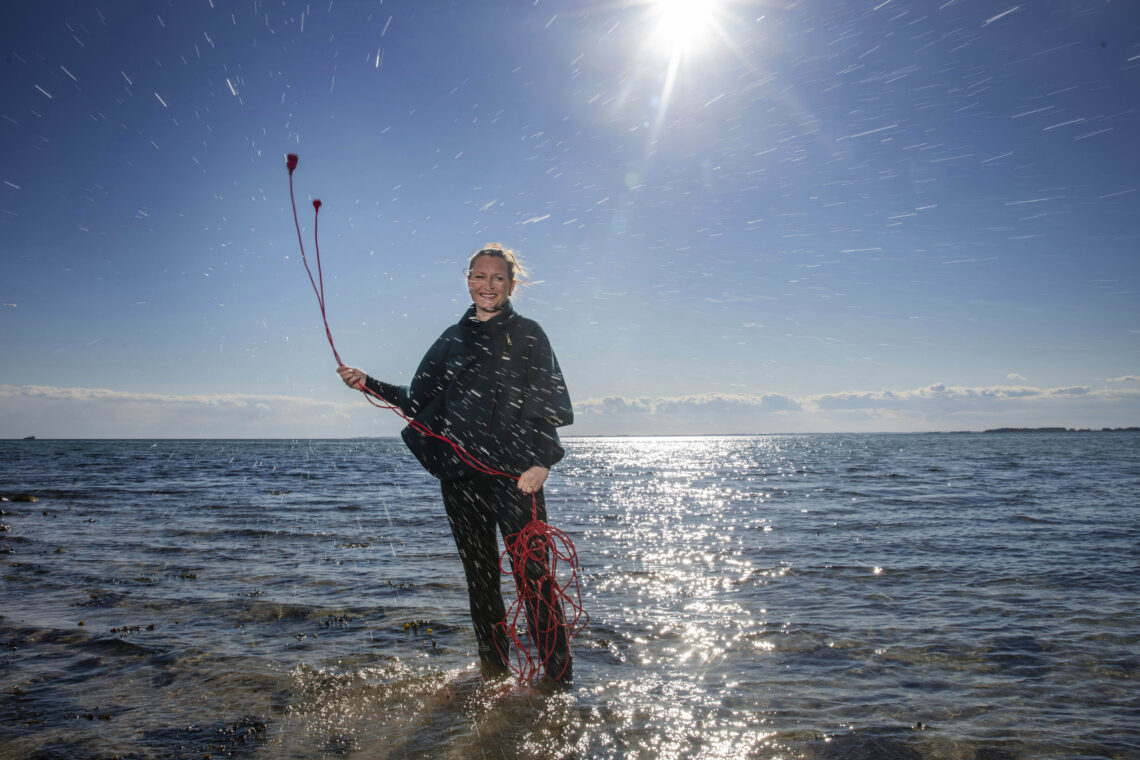 It started as a wild idea, but there was no stopping it. Now, Denmark is building the world’s first energy islands, ushering in a new, major era for the energy sector. By 2030, the two energy islands in the North Sea and the Baltic Sea will deliver 5 GW of power and produce electricity sufficient to cover the annual consumption of five million households. And this is just the beginning of a green transformation on an unprecedented scale. Hanne Storm Edlefsen is at the helm of Energinet’s work on the energy islands.

In 2017, there was a Christmas spectacle at Energinet, the Danish national grid operator. The theme was Disney’s classic Christmas special, From All of Us to All of You. Among the scenes featured in the Danish version are Bambi sliding across the ice and Donald Duck’s snowball fight with Huey, Dewey and Louie. The year at Energinet got a Disney-themed makeover, including deal to build the world’s first wind energy islands in co-operation with Tennet, Energinet’s Dutch counterpart.

Today, as the head of the Energy Islands project, she is leading Energinet’s work on the energy islands. She’s the one whose job it is to sprinkle magic dust on everything and make it fly.

Neverland may be fiction, but the energy islands are far from it. Although the Energy Islands are a lofty, adventurous idea, the project has been so thoroughly grounded and realistic from the outset that the big “why not” remains unanswered:

“The whole island thing was kind of fun and wild, sure, but at the same time, I realised that establishing a coast-like environment out at sea, where there are so many resources, was a good, logical idea. There just had to be something in it,” says Edlefsen.

First, they looked into what it would take to scale everything up to the point that it would actually make sense to establish an island. Then, some Dutch experts were brought in to find out if an island could be built at all, and just like that, the dream began to take shape on the horizon.

“The thing that’s really been an eye-opener and taken the project from Neverland to reality is that it actually doesn’t require a whole lot of groundwork,” Edlefsen explains.

“It’s neither easy nor straightforward, and we’ll be optimising, developing and inventing a lot of things along the way. But from a technical perspective, we really can create energy islands now,” she adds.

Sand, stone and cables are only the technical side of the project. The regulatory and cross-border co-operation needed to make the islands possible is also part of the project:

“There is as much political ‘construction work’ in this as there is engineering work,” says Edlefsen. “How are we going to run the island? How will we protect it from bad weather and terrorism? Will there be a need for clean hydrogen? Should we build everything on the island, or set it up on land first? It’s been a very difficult process, but also a very educational one,” she says.

“Just as Teflon arose as a kind of added bonus from developing space rockets, the added bonus here will be the cross-border collaboration. It’s the political courage to reach far into the future and come up with a common objective. That whole part of the project is real political development work,” Edlefsen explains.

Made possible by a large scale

Make no mistake: There’s plenty of new innovation ahead, and Edlefsen hopes new fossil-free alternatives for air transport and heavy industry can be found in electrofuels and liquid fuels:

“Denmark needs to develop these big, ongoing power-to-X projects and make them more affordable. I think a lot of that development will be kick-started just by the scale we’re talking about with the energy islands. When it comes to development with ammonia, aviation fuels and pure hydrogen, for example, you need a hell of a lot of wind. We’ll have so much wind that the large-scale demonstration needed to take the next steps will be possible,” she says.

“Most of all, I dream of us inventing ways to work in the presence of the uncertainty there is in new things like this. We like to figure it out and do the maths down to the decimals; we have to set things up and invest in possibilities and assumptions, even as they shift around. A model to work with those variables has potential,” she says.

This project is more than just energy on a grand scale; it’s also a civil engineering project of historic dimensions. For Edlefsen, the energy islands are a continuation of the Danish narrative in which we said “no, thank you” to nuclear power and opted for wind.

“What we’re doing here is huge,” she says.

“This is the next chapter of the Danish story. We’re moving frontiers here, and again, we’re the first ones doing this. It’s really quite adventurous, and the green energy islands are making Denmark bigger in every way.”FACTS, THE ENERGY ISLANDS

Facts about the Energy Islands:

The feasibility studies for the energy islands alone are expected to cost 1.1 billion DKK, and they will cover an area three times the size of Bornholm.

The feasibility studies will ensure that both the offshore wind farms and the artificial island are located in areas that are suitable for construction and have the least possible impact on the environment.

The energy island in the North Sea will be located about 80 km off the coast near Thorsminde.

Initially, the island will have a capacity of 3 GW, equivalent to the power consumption of three million households. This is twice as much energy as what all of the offshore wind turbines in Denmark combined can produce today.

It also corresponds to about half of Denmark’s total current electricity consumption.

A historical project in the midst of history

Part of the survey area to be investigated by Energinet contains wrecks from the Battle of Jutland, one of the largest naval battles ever fought.

The Battle of Jutland took place on 31 May 1916 between the German and British fleets. It involved a total of 250 warships and about 100,000 sailors. The fighting took place along the west coast of Jutland, from Hanstholm to Blåvand. A total of 25 warships sank, and nearly 9000 sailors lost their lives.

With numerous diving finds, the Battle of Jutland is the subject of the Jutland Sea War Museum, which opened in 2015 in Thyborøn.